Time to tell the story of our brave adventurers here in the Abomination Vaults, delving into Gauntlight ruins on their second day of adventuring! Will they get more than they bargained for? Before we delve into their story, this adventure is being run using Foundry VTT, an incredible virtual tabletop platform, the best in my personal opinion, and as always if this groups story or adventure interests you, please consider supporting Paizo and the amazing content they continue to create! The original adventure is of course purchaseable here: https://paizo.com/

Also, If you haven’t read the first part of this adventure and wish to partake, the first sessions can be found here!: https://artisticfrienemies.com/abominationvaults/

Without further adieu, let us dive headfirst into the Abomination Vaults with our Dawnlight’s Defenders!

Our session begins with our intrepid adventurers waking up well rested and feeling great after a solid first day of venturing into the ruins. Tigra managed to fight off his Fly pox after some assistance from Wrin and Glattmier, spending some long hours treating him with warm blankets, tea, vitamins, and local herbs and medicines. Everyone woke up and decided to make their way back out to the ruins, but not before stopping and having a chat with the local Otari market owner, Keeleno Lathanar, where they learned a bit more about the history between the druids and the township.

They discover upon meeting Keeleno, that years ago, the old leader of the druids, Jaul Mezmin, had somehow kept hidden that he had inadvertently contracted Lycanthrope, the werewolves blood curse. One night about 30 years ago, sill unaccustomed to the curse he was afflicted with, he had lost control and murdered about half a dozen townsfolk, including the market owners wife Ayla Lathanar. Our heroes learned that the druids did their best to get to him in time, and caught him in the act, but not until after half a dozen were dead.

Ultimately they managed to drive him over the edge of the cliff and into the ocean. A fascinating tale to be sure, however it became apparent through our heroes being perceptive, that Keeleno himself had doubts that Jaul had indeed died that day. Rather he suspected that Jaul had survived, and gone into hiding somewhere, and no one had seen him since.

He informs the party at this point, that if they manage to find him alive, or even brought him in dead or alive, that there would bounty of 50 gold in it for the heroes, bonus of 10 gold if they managed to bring him in alive. Eager to begin their new day of exploration into the ruins, they make their way towards Gauntlight. Stopping to see Worliwynn on your way out towards the ruins at Stone Ring Pond, Worliwyn informs them that she herself also had doubts that their former leader Jaul was truly dead, and that she hoped that going forward, the heroes would have some success in discovering what had become of him, and hoped to repair the long lasting damage done to the their reputation.

Onward to the Ruins..

Heading to the ruins, after the harrowing time the previous day, they decide to exercise an overabundance of caution this time around. They all carefully begin to scout the outer area, noticing that the front guardhouse doors were this time closed since they had been there last, remembering that they had not stopped to close them. They sensed something foul was afoot.

Continuing forward around the east side of the area, they manage to spot a giant froglike monster, that Zarezzi was able to successfully identify as a ‘Slurk’ lurking in the water, and carefully managed to avoid its notice. Zarezzi quietly makes hand gestures to the party, pointing in the direction of the far bank across the river/moat that goes around the main building, past the Slurk, noticing that there happened to be a decaying corpse of a dead Kobold buried in the muck and barely visible. What stood out to him the most however, was that he spied a backpack also covered in muck attached to its back.

Making their way around the buildings, avoiding the slurk for now, they find their footing as the uneven ground rises up a bit higher to look through the buildings arrow slits. Cannonball catches view of a long hallway with an altar at the end, and stained glass windows letting various colours of light into the dark area, where he was able to spot a few skeletal corpses leaning against the walls in 3 different spots, unsure if they were truly just corpses or possibly something more sinister.

Our heroes make their way further around the building, and eventually come upon the small boathouse building that Tigra had spotted from the small tower the previous day when he climbed up to the top and managed to get a better view of the area. They come to a pair of old rotted piers with a small rowboat tied to the mooring on the boathouse pier, across from which they see a low wooden bridge spanning a watery gap between the larger main island and a smaller one. They see a smaller single story building amid the thick reeds growing on the smaller island.

Our heroes search the small fairly new looking rowboat and find a small adventuring pack that contains a stash of fishcake pastries. These pastries they recognize as being sold by the crooks nook in Otari, a possible connection to the missing Osprey Club “employees” in Otari that Yinyasmera sent them to find, and they spy a small Osprey carving inside the pack. A flickering light not previously visible above the dank rotting pier across from the boathouse and attached to the other building gets our heroes attention.

Deciding to keep their distance for now, unsure of what the light could possibly be, our heroes proceed to scouting the outside overcautiously. They carefully find there is no other outside threats other than that possible flickering light, narrowly avoiding its attention as it begins to encroach on Rayla after she separates from the rest of the party. She bids a hasty retreat and rejoins the others. She inspects the door for traps, and finding none, she pushes the slightly stuck in its frame door open with a fluid display of athleticism.

As they enter the door, they find themselves in a study featuring several bookshelves, a desk, and two chairs. The books an objects within lay in disarray with torn pages strewn haphazardly across the room. They seem at this point to be greeted by a glowing light that appears to be talking in a spooky voice. Immediately Zarezzi, with his knowledge of the Arcane and magics, recognizes it as a dancing lights spell combined with a ventriloquism spell. It isn’t long before they discover a tiny little fey creature called a Brownie, was using the magic to talk through to stay hidden.

Confronting the frightened tiny trickster, they learn that his name is “Tangletop”. Tangletop converses with our heroes, agreeing to help them by telling them 3 secrets he knew about the ruins in exchange for obtaining the “Jinglyshine” down the hall. He warns our heroes that a “blank-faced doll” will try to stop them from getting it, and points outside towards the pier across from the small island that the rowboat is tied to. He quickly says “others down below, dragon thing under dock… people went?” before using magic to cast Dimension Door and get away from the large adventurers. Tasked with getting the “Shiny Jinglyshine” from the room down the hall, our heroes proceed forward cautiously.

Making their way down the hall, they find a small side room and discover a set of stairs going downwards into the darkness. For the first time they begin to realize that there was a lower level, possibly here, and in the main building on the larger island. Proceeding forward ignoring the stairs for now, they find a series of four tall paintings lining the northwestern wall, with various inscriptions. Layers of mold and decay, time and the elements, appear to have severely damaged them. Opening the door at the end, they find what appears to be a once elegant workshop that has fallen into complete shambles over the centuries. Soggy strings of dripping moss hanging from the ceiling through cracks in the wooden roof above. The entire floor is absolutely covered by a thick layer of jagged broken glass. Workbenches, armatures, shelves, display cases, all lay in ruins.

As our heroes enter the room, they are greeted by a hostile animated doll of a person with a raven head, asking when master Azrinae was coming back, that immediately realizing it’s master was nowhere to be found, the doll flew into rage and attacked. A hard fought battle ensued, two of our heroes ended up unconscious in the broken glass covering the entire floor, at a disadvantage as their opponent floated above the ground. They persevered, and the dust settled on what they determined to be a ruined lens workshop, possibly where large lenses were crafted for the top of the lighthouse. It is at this moment with the calm after the storm ensuing that Zarezzi remembers, “Soulbound dolls are made to be companions, so who is this one supposed to be companion for? Master Azrinae?”

Our heroes discover the “Jinglyshine”, which turned out to be an ornate bejewelled spyglass worth 20 gold pieces. Searching the now inanimate doll, they find the Soul focus gem that had been powering it, and Zarezzi was able to dig deep into his memory about a passage he had read years ago, about constructs. He was able to determine that their assailant was indeed a “Soulbound Doll” and that the focus gem contained a soul within it.

The dust finishes settling, and our heroes remember that the hall has some portraits, and decided to examine them further. The first portrait they recognized as being of the metropolis city of Absalom in flames with the inscription bearing “So shall the fools suffer.” The next portrait looked to be a shredded portrait of a drow elf bearing the inscription “Artist at Work”. The third portrait they recognized as Gauntlight keep, except as it was before its upper floors collapsed and the lighthouse emitting a pale blue light with ghostly faces sneering and grimacing within the light, bearing the inscription “Let the Light Shine Forever”. Finally, the last portrait depicted a smirking woman dressed in a long flowing green gown with the inscription “Lady of the Light”.

It was then that the keen eyes of Rayla spotted words scratched into the stone and barely legible just below the final painting. The words etched into the stone were in the language Aklo, and read “I serve you still! You shall be avenged!” It was at this moment that our heroes began to realize they were just seeing the beginning of an adventure that was turning out to be a lot more than they had initially bargained for..

This site uses Akismet to reduce spam. Learn how your comment data is processed. 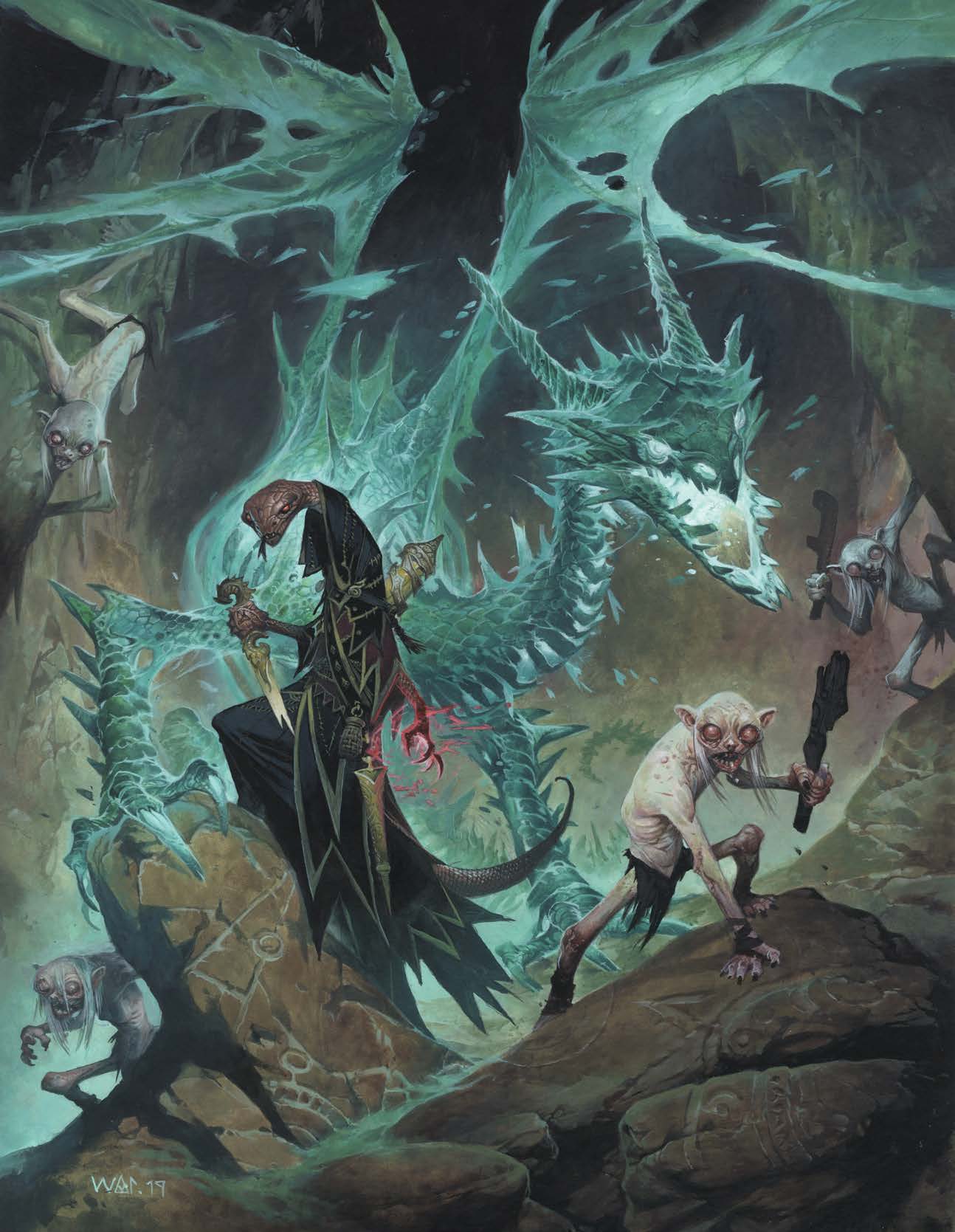